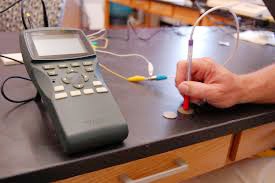 In a standard eddy current testing a circular coil carrying current is placed in proximity to the test specimen (which must be electrically conductive).The alternating current in the coil generates changing magnetic field which interacts with test specimen and generates eddy current.Variations in the phase and magnitude of these eddy currents can be monitored using a second 'receiver' coil, or by measuring changes to the current flowing in the primary 'excitation' coil. Variations in the electrical conductivity or magnetic permeability of the test object, or the presence of any flaws, will cause a change in eddy current and a corresponding change in the phase and amplitude of the measured current. This is the basis of standard (flat coil) eddy current inspection, the most widely used eddy current technique.

However, eddy-current testing can detect very small cracks in or near the surface of the material, the surfaces need minimal preparation, and physically complex geometries can be investigated. It is also useful for making electrical conductivity and coating thickness measurements.

Eddy current test mostly used for sorting of material grade mixed up and sorting for hardness variation and case hardness depth fall hardness and also for case carburising for finish and semifinish components.